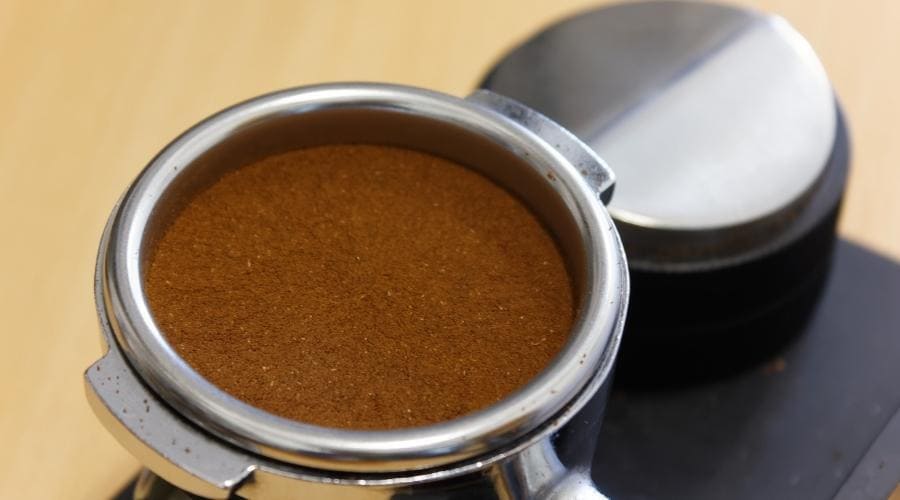 Ever had one of those weird moments when you are trying to use your coffee maker, but you just can’t seem to get the extraction right and the coffee keeps coming out with a sour, bitter taste?

Don’t worry, there’s an easy solution for this. In many cases, the issue is something popularly known as espresso channeling, and it can be corrected by using a coffee distributor or tamper.

So, what is the difference between coffee distributor vs tamper? In a nutshell, a distributor will create a uniform surface in the basket before tampering, while the tamper’s job is to compress the coffee grounds.

Espresso channeling is the term we use for when you force pressurized water to take the easiest path as it passes through your coffee. When this happens, the water extracts only a small amount of caffeine from the grounds while the rest remains under-extracted.

This explains why your coffee sometimes has a sour, bitter, and unpleasant taste.

The tricky thing is that it doesn’t take much for channeling to occur – just a tiny mistake when leveling and tamping can lead to the frustrating espresso channeling. This is where the coffee distributor or leveler comes into play.

The work of a coffee distributor is to spread and even out your coffee grounds before tamping, so that you don’t have areas of low and high compression. Unevenly distributed coffee is what causes espresso channeling.

If your idea of leveling is tapping your loaded portafilter with a spoon, you need to stop. You won’t notice it, but there’ll always be some unevenly compressed parts when you are tamping due to how the coffee was distributed beforehand.

Sometimes when I’m not pressed for time or working under pressure, I tend to find myself using my regular traditional tamper instead of a distributor.

If the coffee is compacted evenly, your tamper will create some resistance for the pressurized water, forcing it to linger, saturate, and extract all that delicious caffeine flavor. The water also extracts oils from the coffee as it passes through the compressed grounds to give your drink a rich, savory texture.

Coffee Distributor vs Tamper? Which is the best?

Even the most skillful barista cannot tamp evenly every time. Sometimes you need something a little more efficient at distributing coffee than a traditional tamper.

A tool that can achieve the same results whether you are a barista serving 50 customers per minute, or you’re just brewing homemade coffee at the comfort of your kitchen. You need a coffee distributor.

A distributor helps to eliminate the element of human error, meaning that you don’t have to use a lot of effort to ensure your coffee is evenly spread out within the filter basket.

However, all of this effort is naught if your coffee is not properly ground. If the coffee forms an uneven mound inside the filter basket, there’s very little your tamper can do to level it up – at least not completely.

Even if the surface looks smooth and even, there’ll be several different lumps and imperfections underneath. It is simply impossible to create a uniform flow with all of these irregular sections.

In a nutshell, the tamper’s job is to compress the coffee in your filter basket, but it doesn’t guarantee you won’t have some lumps and unevenness under the surface.

That said, the tamper does have its own fanbase. If you are one of those “old-school” baristas who would rather stick to tried and tested brewing methods, you will love the tamp.

However, if you are looking for a faster tool that will give you a little more accurate result with minimal effort, you should go for a distributor.

I’d advise you to get both if you can – the coffee distributor for creating a uniform surface in the basket before tampering.

And if you have the budget to afford it, there are coffee distributors that come with two sides, one for tamping and the other for distributing. Below is a good example from amazon.

This will ensure that the coffee is as compact as possible when pressurized water is introduced, thus eliminating the issue of tamping inconsistency in some of your shots.

That is why the leveler is more commonly used in busy cafes where skill levels among the baristas vary.

Also known as puck tampers (because of their design), palm tampers come with an adjustment mechanism that allows you to calibrate the tool to tamp to a specific depth, depending on your dose of coffee.

The importance of tamping consistency cannot be overemphasized. The problem I have with the traditional tamper is that it is highly prone to inconsistency, as it relies solely on muscle memory and practice to reproduce results.

Palm tampers are set to tamp to a particular depth (not pressure) every time. This means that you can always expect a level and consistent tamp, as long as you maintain a consistent dose.

A calibrated tamper can be adjusted to tamp with a particular pressure, so you don’t have to worry about consistency when you change your dose.

However, most designs don’t guarantee you will have a level tamp, and it takes practice to perfect the technique. If you keep going beyond the set point of the spring, you may end up using a higher pressure than intended.

Overall, in terms of consistency, the palm tamper has the edge as it guarantees a level puck and it’s impossible to over-tamp.

You probably don’t need to worry about ergonomics if you are just an average coffee user with a brewing machine at home. On the other hand, if you are a commercial barista dealing with hundreds of espresso orders a day, poor ergonomics can easily lead to wrist injury.

A regular tamper comes with a handle that you can grip and push down. With a palm tamper, you use your palm to apply pressure.

The palm tamper takes the cake here as it keeps your hand in a more natural position.

Traditional tampers are the least expensive option. If you are a skilled barista, they are a huge bang for the buck.

Calibrated tampers are available in a variety of sizes and prices. You can get a decent tamper from a mid-level brand such as Normcore for under $50. The most expensive ones can go for up to $200.

Only a few premium brands offer palm tampers. In other words, they are extremely pricey in comparison to the other types.

In terms of value for your money, the calibrated tamper stands out with a great combination of low price range and consistency.

Finding the right tamper ultimately depends on your budget and how often you make coffee.

A palm tamper is ideal if:

A regular tamper is suitable if:

The most popular tampers today include the force tamper and decent tamper.

The main difference between the force tamper and decent tamper is how they are designed. The force tamper is spring loaded. When you press it down, it cocks and activates a spring that applies pressure with a rather violent punch.

The Decent tamper is a type of self leveling tamper in which you apply the pressure directly.

Decent tampers pride themselves in being innovative and perfectly fitting. The newer Decent v4 comes with a refined handle and anti-stick tamping base, and the spring is much lighter and easier to tamp.

The calibrated spring of a decent tamper guarantees even tamping regardless of who is using the tamper.

The purpose of tamping is to level the puck and apply pressure to force air out of the grinds.

The Force Tamper is designed to produce a perfectly tamped, perfectly level puck repeatedly and effortlessly. To achieve this, it relies on a patented spring mechanism that makes it stand out from similar calibrated tampers.

When you press down the force tamper, its spring compresses and then decompresses with a “punch” that provides consistent pressure. So, it doesn’t matter whether the arm pushing down on the tamper is strong or weak, the applied pressure will be the same.

It’s easy to see how this could be appealing for either a home setting where different family members or flatmates might share the same tamper, or a professional setting with various baristas.

It guarantees a consistent level and pressure when tamping regardless of the skill or strength of the person using it. This is enhanced by the addition of an inbuilt distributor, which goes a long way towards delivering a consistently level puck.

When it comes to technical operation, there are two plates on the force tamper rather than one. Pushing the handle down causes the spring to compress and then surge in a burst of energy, subsequently slamming the piston to the base to even out the coffee grounds.

Force Tamper Vs Decent Tamper – Ideal One for you?

If you are looking for a tamper that is slightly more efficient than a generic tamper, a Decent tamper is a good choice.

Generally, the Force Tamper is more suitable for beginner baristas, as it offers a consistency that is great for experimentation and extraction.

Both types of tampers are designed to minimize your risk of wrist injury, which is crucial if you are a barista in a busy coffee shop.

Wrist strains and injuries are common among commercial baristas, so these tampers are ideal as they typically require less pressure. Espresso is supposed to be dispensed fairly quickly; not dripping too slow, and definitely not crazy fast. To put this into perspective, one shot of espresso should be done in… If you’re on the lookout for some coffee grounds to fill up your reusable K-cup, hear this now… You’re amazing! Well, perhaps you already know this, but every time you… Any experienced barista will tell you that WDT tools are the key to making good coffee with even extractions. The Weiss Distribution Technique involves using a thin object (e.g. a… Corto means “short” in Spanish. In the context of coffee, Corto coffee refers to a short (restricted) shot of espresso; basically, this means that the barista only pulls the first…